Rocks and Water as Metaphor for Life’s Journey: image and text. 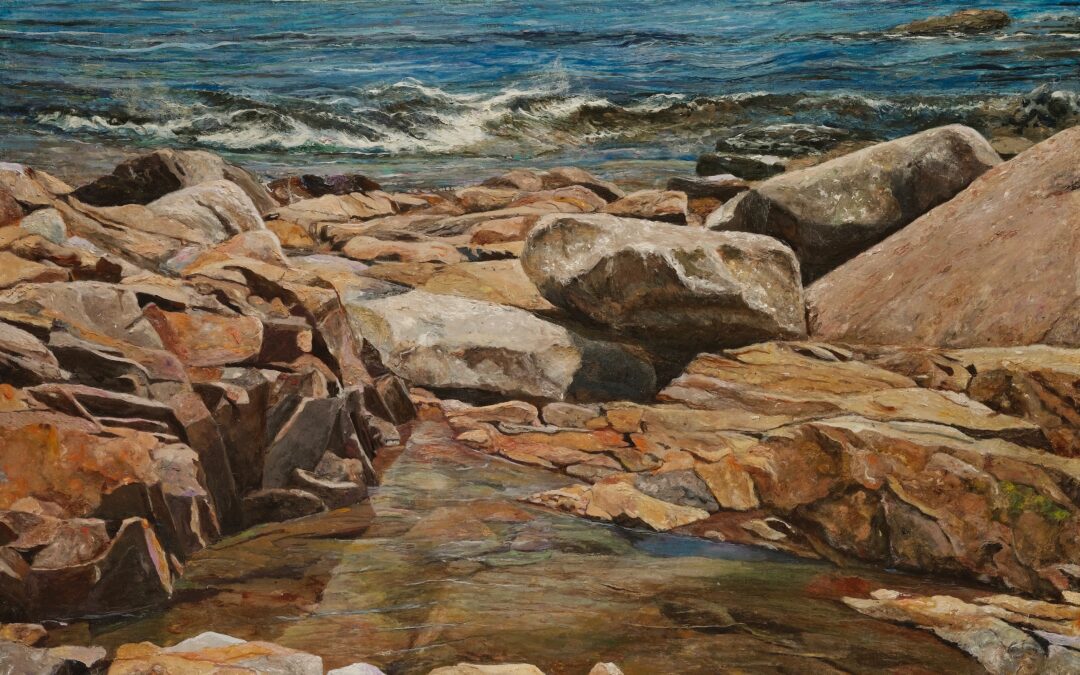 As an artist for many years, I have been inspired by the ocean. It’s harsh winds, soft surface, fiery waves, smell of the salt air. All of these things have inspired me to revisit this landscape over and over again. In fact, I have been visiting the ocean to paint and record its beauty since I first moved to NewEngland in 1987. Below are seamless of my rock and water painting, a video I made of this series of work, and the text of the transcript from the video.

Does the ocean call to you?  Do you find yourself longing to return to the shores? To smell the salt air, feel the sea breeze, and hear the sound of the waves? When I moved to New England in 1986 to attend graduate school, I found myself returning to the ocean again and again, seeking quietude, reflection and inspiration. As I thought about the journey that had taken me from Central New York to New England, I made the connection for how the rocks and water that lined the shore was a metaphor to describe that journey, ultimately becoming the thesis for my graduate exhibition.  For me, this is where the metaphor of rocks and water as life’s journey comes together.

The ocean water is soft and cool at the shoreline, but, when the weather conditions are right, as they often are in NE, the ocean tide relentlessly crashes against the hard rocks.  The rocks weigh much more than the water, but the strength of the crashing waves can literally move the rocks into new formations. Ultimately, the rocks are smoothed by the water, and over time, they will disintegrate into harmless particles of sand almost like ashes after a raging fire. For me, the crashing waves represents how life challenges us-often unexpectedly.  These sometimes-violent storms reshape us much like the waves shift the formations of the rocks.  We long for the stillness of the tide pool, but we find our strength when we are challenged by the storms.  The rocks sometimes creating obstacles to our return to the shore, where it is safe.

Similarly, we want to see ourselves strong like the rocks, able to weather the most violent storms.  But time softens us, heals us, the storms we weather wizen us.  We are smoothed at the edges as we anticipate the next storm, for which we know we must weather.  I painted the waves so they appear to be crashing up against the rocks and in contrast to the calm waters of the tide pool in the foreground to visually emphasize this metaphor.

This is easy to update text from footer widget area. Add here information about your store.