Here are some of the paintings I was inspired by as I worked on a commissioned painting  Parker River, Newbury, MA. 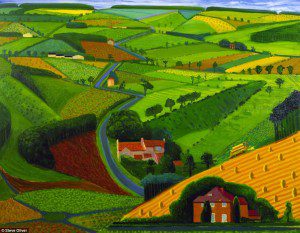 I love the way Hockney uses color in his landscapes. The first time I saw one of these gigantic canvases at the Museum of Fine Arts in Boston, I thought, well, some day I’ll have the courage to put pink, lime green and orange into my work just like Hockney. Look at the left background of the Parker River landscape, and you will see strips of light green. The decision to put pink in the sky, water and touches of it on the land and the meandering ribbon of water in Parker River are inspired by Hockney.

The inspiration from this painting is probably self-explanatory. The oxen are the theme of the painting-a post French Revolutionary subject about labor and hard work encouraged by the state. The raw earth, direction of the oxen moving from left to right (same as the wind driven rhythm of the water in Parker River), and the aerial perspective Bonheur was able to suggest in the gradation of colors of the sky inspired the composition, palette, low clouds (just barely visible behind the tree lines) and muddy embankments in Parker River.