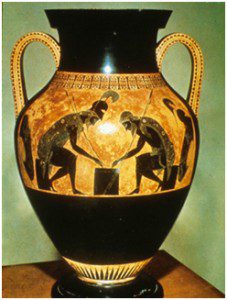 When I was asked “what influences your art?” I knew the person asking the question really meant “what other artists influence you art?”, or “what subjects influence your art?”.  While these variables have certainly influenced me, as I have progressed as an artist I find myself increasingly influenced by concepts, or, more specifically, by philosophical traits introduced by previous cultures.  One such concept is symmetria, introduced by the Greeks and defined as “a dynamic balance of imbalances, such as straight vs. bent, left vs. right, one complimentary color offset by another and so on.

The Greeks used symmetria in most of their major works, including the vase painting of Achilles and Ajax playing checkers by Exekias.  In this painting we see the two mythical warriors concentrating on their game; Achilles with his hat on, his shield at his back, has sword leaning against the board that acts as a table.  Ajax, his hat off, his shield leaning against a tree and his shield at his side, provides an imbalance to Achilles that instead of mirroring his competitor’s gait provides a level of imbalance that mimics the tension they undoubtedly feel as they compete in their game

Attempting to mimic the Greek use of symmetria with six paintings has proven challenging.  I have found myself referring to the Exekias’ vase repeatedly and marveling over the genius of this ancient artist.  I hope you can join me at the open studio on Nov. 15-16 and see for yourself how I used symmetria in my commission of six large-scale paintings of the birch tree, commissioned by the state of New Hampshire through the percent for art program.

Meg Black is a New England based artist who works with natural fibers to create stunning works of art.