Dear Claude Monet, you won’t believe what your painting just sold for!

Claude Monet is famous for painting many subjects, water lilies, cathedral facades, footbridges, and of course, hay stacks. It is his hay stack painting, Meules,  that captured a huge sum of money at auction recently 110 million dollars to be exact.   What makes these paintings so captivating?  Two ideas: they are all painted in multiples, and the the subject is light as metaphor.  Monet captures the light as it plays off of natural objects.  In fact, he is more interested in light than the subject itself.  Think about it: Monet is at his most prolific during the height of the industrial revolution when change is constant-much like our world today. Light changes at great speed, thus his focus on light as a metaphor for constant change.  By painting in multiples, he revisits the same subject but in a different light.  Years later, Hollywood directs such as Martin Scorsese will create similar effects using film and stage lighting.

I have been thinking of Monet as I have been painting this series of River Road, Topsfield.  To be sure, it is a beautiful place-tree lined winding road, open fields, wild flowers, gorgeous architecture. But, much like the great Impressionist artist himself, I have been focusing on the natural sunlight as it moves through the day, through the seasons, and through all sorts of weather conditions-something New England is famous for!  And, in keeping with his idea of multiples, I am painting in a series, five paintings to be exact, two of which are featured here. 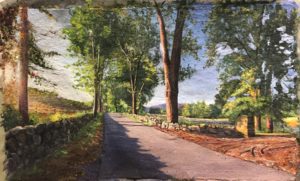