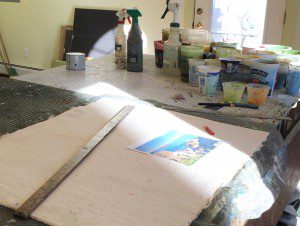 Day One: Ah yes, the artist’s worst dilemma and greatest challenge-the blank sheet, the raw background, the gessoed canvas.  Blank, white, virgin background waiting to be turned and twisted, cared for, screamed at, manipulated and manipulating.  Wanting to be turned into something that does not yet exist.  Genesis.  Early monday morning of the creation story. 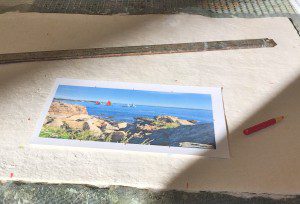 And so I walked into my studio bright and early and laid one of the many photographs I took last summer down onto the surface that I will use to create this painting.  Palette set, dimensions considered.  Monday morning.

Day Two: I have gridded out the photograph to match the scale of the eventual painting.  I have painted in the background areas and considered how to play up the contrasts, which for me are the most exciting characteristics of the painting. 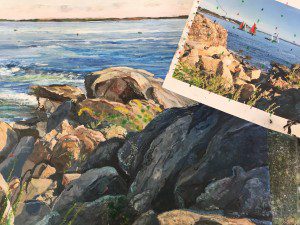 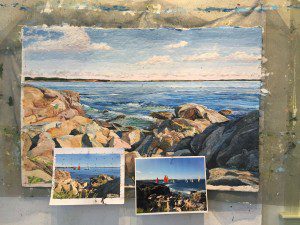 Day three of working on the Hospice Auction painting. Trying to unite photos of changing skies, crashing wave, sail boats and a rocky shoreline into one composition. Much more needs to be done. 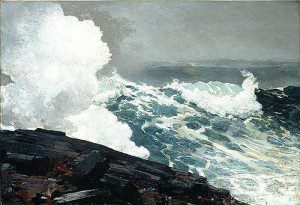 As I work I find myself channeling Winslow Homer, Van Gogh and Rosa Bonheur. This is for me why I study art history. Homer left us clues for how to connect with his subject, his audience and himself.

Van Gogh said in a letter to his brother Theo about his painting of The Good Samaritan, “I hope it has feeling.” 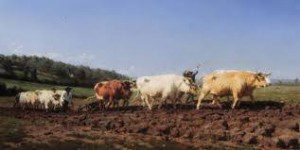 And Rosa?, well out of a fit of frustration she kicked a hole in her in-progress painting of “Plowing in the Nivernais” because she was disgusted at her lack of ability to make the sky look as though it was receding into the distance. My critical eye thinks she was doing just fine. 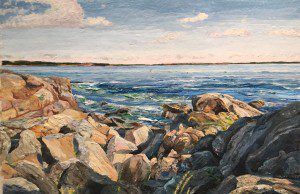 Day four of painting the Hospice painting. So after looking at this composition more closely, I started feeling as though the sea was too calm. No way am I painting a seascape with sail boats AND calm waters. Too safe. 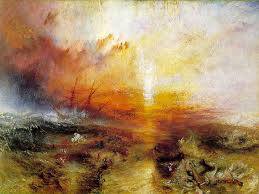 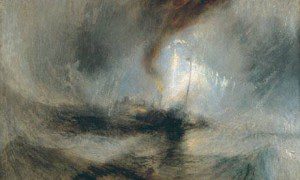 This got me to thinking about JMW Turner and his lively, sometimes ferocious seascapes. So, I added more stormy clouds, rougher waters, and a starker contest in the rocks. Day four: channeling Turner.

Day Five:  I end the work week by making a brief video of the painting in progress.

Short Video of the painting in progress.