WAR IS THE ENEMY OF BEAUTY 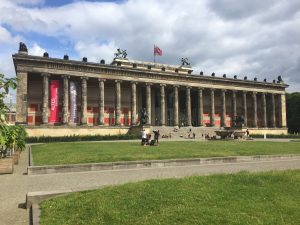 Carl Frederick Schinkel’s excellent Altes Museum, Berlin, is an outstanding example of Neo-Classical architecture for which I had the pleasure of visiting last week. Upon closer inspection however, one can see, even in this distant photograph, that something is not quite right. The massive columns that grace the museum (the Berlin Kore is amongst the treasures inside), are black from a raging fire which engulfed the building during the final days of WWII. In several areas, one notices patches on the columns where the fire was so severe, sections of marble needed to be replaced. 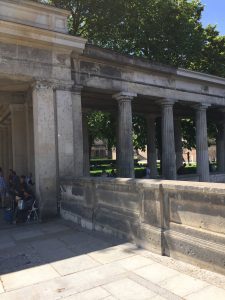 In the close up photograph on the left, one notices that the building and its surrounding columns is riddled with bullet holes from the intense fighting that took place between what was left of the Germany army and the much better equipped Soviet forces. Hitler’s bunker is only blocks away from the museum. This was indeed the final days of that long and grueling fight.

The museum was lovely-everything I hoped it would be. The exhibits were very well designed and organized. The museum personal warm and welcoming. Visitors friendly and polite.

But, under a very thin layer of delight in seeing this landmark, there was the sense of sadness that such a landmark could be so cruelly mistreated. Long may Herr Schinkel’s masterpiece stand. A testimony to what is beauty in this world.

Meg Black is a New England based artist who works with natural fibers to create stunning works of art.