Art History Survey: Would you pardon this artist for Murder?

On May 29, 1606, in Rome, during a brawl over a disputed score in a game of tennis, Caravaggio killed his opponent, Ranuccio Tomassoni. He then fled to Malta to avoid probable execution for his crime, but sent his painting of 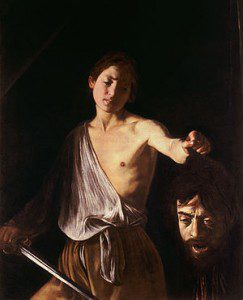 David holding the head of Goliath to the papal court as a kind of painted petition for pardon for the murder.  Interestingly, Caravaggio presents his self portrait as the severed head of Goliath, not the youthful David.  In fact pardon was granted by the Pope upon seeing this painting, but news of the Pope’s decision did not reach Caravaggio before he died in Porto Ercole of fever. Would you have pardoned Caravaggio if you were the Pope?  Would an artist of a lesser skill level have fared as well?  In the next post I’ll discuss the lighting Caravaggio used to create this striking work, a technique  known as tenebrism.

Meg Black creates nature-influenced paintings and wall sculptures for public and private collections. Sign up for newsletter and get 20% off. 👇

What can I say, my palette matches my shirt. Why i

Excited to have my artwork featured on the Saatchi

Working on these four smaller paintings for a grid

At work on a particularly long landscape painting.

It’s all in the wrist. One of the most important

Just entered this beauty into the #codaworx compet

WHAT A STORY! I remember this lovely couple callin

I’m excited to share that I have been accepted i

Why paint with spoons? It allows the pulp to sit

Including art for healthcare environments has show

Including nature-based art for healthcare environm

This short video shows my in-progress painting of