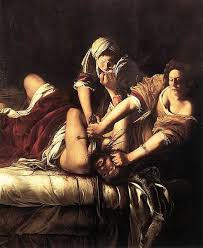 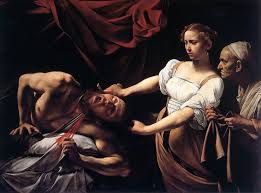 Artemisia Gentileschi is one of Caravaggio’s most famous followers, but scholars disagree on which artist was more successful in their rendering of this subject.

Subject: Judith with the severed head of Holofernes, an invading general of the Babylonian king Nebuchadnezzar, is a story from the Hebrew Bible. It was said that Nebuchadnezzar dispatched Holofernes to take vengeance on Israel, a nation that had resisted his reign. The general laid siege to the Hebrew city of Meselieh, which almost surrendered. It was saved by Judith, a beautiful Hebrew widow who entered Holofernes’ s camp and seduced him. Judith then beheaded Holofernes while he was drunk. She returned to Bethulia with the disembodied head, and the Hebrews defeated the enemy. Artemisia often used the theme of women getting revenge toward aggressive men due to her rape by a fellow student while both were students in her father’s studio.

So, what do you think: which artist paints it better?

Meg Black creates nature-influenced paintings and wall sculptures for public and private collections. Sign up for newsletter and get 20% off. 👇

What can I say, my palette matches my shirt. Why i

Excited to have my artwork featured on the Saatchi

Working on these four smaller paintings for a grid

At work on a particularly long landscape painting.

It’s all in the wrist. One of the most important

Just entered this beauty into the #codaworx compet

WHAT A STORY! I remember this lovely couple callin

I’m excited to share that I have been accepted i

Why paint with spoons? It allows the pulp to sit

Including art for healthcare environments has show

Including nature-based art for healthcare environm

This short video shows my in-progress painting of